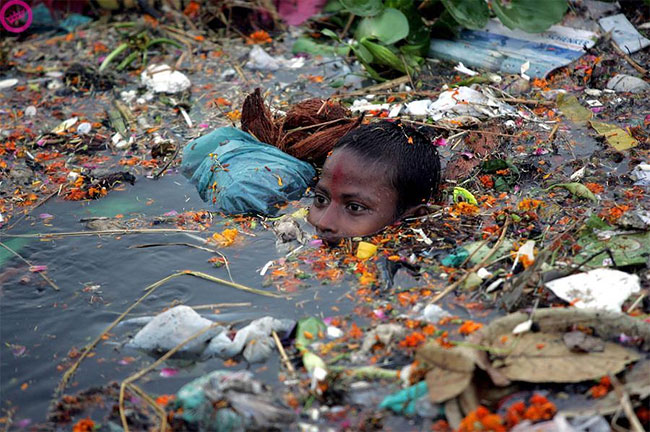 Environmental Issues of Fabric Production. There are so many processes which go into making a single item of clothing and to think of how many millions of clothes are made every year! All of these processes use environmental resources, such as fossil fuels for the transportation of fibres grown in one country to where they are manufactured into garments in another country and then sold in another. This is how some of the processes to produce fibres and fabrics can ruin the environment and some of the actions which can be implemented to improve damages:

Cotton is a key fibre of the apparel industry and is in nearly 40% of our clothing. The largest cotton growers are China, U.S, Pakistan, Brazil and India. Cotton is highly dependent on water, it uses water throughout its growing life-cycle for transpiration and evaporation and is responsible for 2.6 per cent of global water use, taking up an unbelievable 2,700 litres of water to produce the cotton needed to make a single t-shirt. The problem with this is that it’s depleting scarce water supplies, causing droughts and drying up the Aral sea. This is additional to being heavy on the use of pesticides (chemicals) to enable it to grow without the obstruction of pests as well as taking up valuable land needed for growing food crops for the local people. These pesticide ingredients include water, carbon dioxide and oil.

What is organic cotton?

So what can we do about it? Organic cotton is a method of growing cotton in a more environmentally friendly way. The biggest advantage of organic cotton is the removal of harmful chemicals in pesticides: instead it uses natural ingredients such as garlic and chilli to fight off pests. Consequently reducing the carbon footprint of conventional cotton by not using carbon dioxide, as well as giving a fairer life for the workers who do not have to be exposed to such harmful chemicals which can cause illness or even death.

It should be known that organic cotton will need more workers (which creates more jobs) to take care of the plant and keep up with the natural processes rather than just using harsh chemicals, this constitutes for the higher price because organic also embodies better welfare. When you wear organic cotton you will get to benefit from not having chemical in the clothing touching your skin and knowing you’re wearing something made in a fairer way.

Two of the main synthetic fibres used in our clothing today is nylon and polyester. They are manmade fibres made from petrochemicals, fundamentally crude oil. Unfortunately the process to manufacture these fibres consumes a large amount of energy to power the heat and steam machinery systems with high pressures and temperatures.

Polyester is the most widely used synthetic fibre, first developed in the 1940s it is now very effective in clothing because of its easy care, silky smooth and lightweight properties. Polyester is often blended with natural fibres such as cotton for tops and suiting, whereas nylon is more expensive to produce but has better weather resistant properties and flexibility so you’ll find it in sporting apparel blended with Lycra.

Alongside some of the energy efficiency problems, synthetic fibres are essentially plastic materials, so nothing about them is natural, making them not biodegradable in landfill. Recycled polyester is one way companies are trying to tackle some of these problems. The method is based on developments which allows used plastic bottles to be recycled into polyester fibres, rather than using oil in its pure form, in a more energy efficient process.

We have to be careful with reputation…

Obviously claiming to be environmental will only help a company in how they appear to the public. Some companies may declare that they use recycled polyester but stories of using new plastic bottles rather than already used ones to claim a recycled product as an alternative to making it from crude oil is a cause for concern in terms of reliability as this doesn’t really do as much good either! Whilst it is hard for us to know what really goes on behind the scenes, why not look at the amount of information the company provides on their eco-friendly policy. It may also be worthwhile simply contacting them for more information.

Clothing is constantly being dyed to make all the fantastic colours we can get now, but again, on top of the sugar coated surface of pastel pinks and stonewashed blues, underneath these dyes and fabric finishes are made using coal and oil as well as other chemicals. The trouble with this is not only the depletion of crucial natural capital but also careless disposal of chemicals into rivers is polluting the water and killing aquatic life. As with the pesticides used for growing cotton, chemicals can remain in our clothing, reaching our skin and only coming out after a few washes in the washing machine. If you look to the Citarum River in Indonesia, known as the most polluted river in the world, it is devastating how full of chemicals the water is from all the textile factories surrounding it as well as plastics and rubbish floating in it.

Is there any way to solve this?

The biggest way to make a change essentially lies in the hands of the production factories, for there is little that the consumer can do to transform the dyeing methods. New technologies have been developed to make more efficient processes which are less water intensive, but there is no simple answer to a definitive system. As long as different fibres absorb dye in diverse ways, it is necessary to have various methods. With around 6 trillion litres of freshwater being used each year for textile colouring, modern methods of waterless dying processes are a much needed and less hazardous way of dyeing fabric as they cut water loss and chemical pollution to the seas. Unfortunately due to the expense of these waterless technologies, only the most profitable companies are able to afford it. So it’s a shame that some clothing giants (namely Victoria’s secret and Calvin Klein who have been mentioned by Greenpeace) haven’t yet caught on, using suppliers who have not properly controlled dye pollution and have been confronted for the detection of harmful of chemicals in their underwear. On the other hand, more environmental solutions have been headed by Adidas who have been using DyeCoo to make drydye fabric. Other technologies available include Airdye and Colourzen in addition to certain natural dyes which has been employed by the company Botanical Colours.