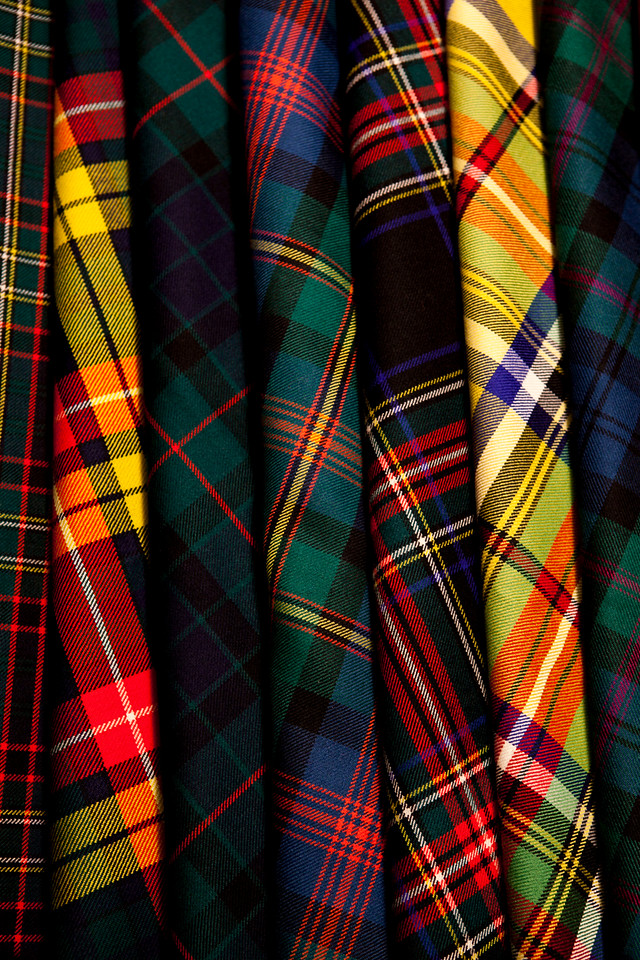 Tartans are especially associated with Scotland. To some people tartans are simply a fashionable pattern whereas others believe they emerged as a way of differentiating the clans of Scotland, much like African head wraps can vary between regions. Ultimately they are a type of decorative cloth with patterns that can differ so much by just making a simple change, for instance the amount of stripes vertically or horizontally, the width, colour and the distance between the stripes. The diversity which can come from this has led to various areas in Scotland, or clans, to wear a particular tartan pattern, although it is believed that clan tartans were not truly recognised until later in the 18th century. Originally the fabric pattern would have depended on what the local producer made. So what is the history of tartan and why is the pattern so unique?

What are Scottish clans?

Clan identity stems from the clans in the mountainous highlands of Scotland. Clans were like a tribal system of different extended families, most with some sort of genetic relation even if farther back down the line, hence why many tartans are called surnames such as Macdonald. The clan system died out from the 18th century and into the 19th when the government placed actions to eliminate them from their seemingly unorderly and uncivilised manner. Many other tartans represent a location in Scotland because clans had their own territories as a form of protection and way of establishing a clan community.

Later in the mid 19th century under Queen Victoria’s rein, her admiration for Scotland meant tartans became popular again, even amongst the lowlanders, as the Queen dressed her children in tartan and had her own exclusive royal tartan designed. A more ‘stylish’ form of the highlanders became fashionable, with a new style of the kilt being worn and soon many Scottish people in the lowlands wanted a clan print of their own.

Making a tartan and the authenticity

Did you know how much criteria there is for a design to be called a tartan? Check and tartan are sometimes used interchangeably because technically tartan is a type of check, but for something to be named a tartan it has to be registered and conform to a range of criteria. This prevents too much confusion when trying to distinguish between tartan designs. A tartan design can come in any form e.g. printed but it must be able to be woven as a fabric. Other criteria includes the use of only 6 colours, although when woven the thread colours are combined this creates more shades of colours. Many of the clan tartans have been designed and registered in recent times, there are not so many from the 18th century, although inspiration often comes from historical influences. More colours are used now in comparison to older designs such as the Black Watch and the original form of the Falkirk cloth, both which have less colour which are more subdued.

Who is allowed to wear tartan?

The debate, decoration or descendants is woven into this whole topic. Obviously and rightly, everyone is allowed to wear tartans, there should be no disallowing anyone from wearing a pattern which they admire. Tartan check is now a stylish pattern to wear, used by clothing companies and designers, many tartans are also being registered purely for fashion purposes. In this regard you can wear whatever tartan pattern you like and we all know the typical checked shirt men and women wear today. However there are some, not so much rules, but rather customs when it comes to traditional highland dress. This does not apply to many of us in terms of day to day wear but for special occasions such as a wedding, it is mostly recognised that Scottish wear their own clan’s tartan. This means that a person’s kilt should be made from the tartan which is registered with their surname, although if their surname is no longer of Scottish heritage then the name of a Scottish descendant is often approved. If a person cannot find their tartan then any corporate or fashion tartan is recommended.