Calico Fabric hails from India, specifically the city of Calicut, Kerala, India, after which the fabric is named. It is one of the oldest cottons in the world and is recognized for its durability. 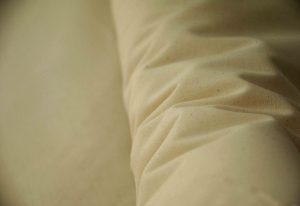 Calico dates back to India, as far back as before the Common Era. As early as 1630, cotton calico prints were being exported to England where they were praised for their beautiful patterns. Originally dubbed as “calicuts,” the name calico evolved as first referring to Indian cottons with an equal weft and warp, then to any plain-weave cotton.

During the 1700s, England banned the import of calico in order to strengthen its own fabric industry. Although the move initially failed due to calico being especially popular amongst women known as “Calico Madams,” the Calico Act eventually caused India to lose its textile industry. This devastation forced India to import directly from England.

Calico is unbleached and not entirely processed cotton. In India, manufacturers added dyes to create prints, which became popular and known as calico prints. Without dye, calico has a grayish tinge, as a result of the raw materials used in the weaving process.

Calico prints are generally two-toned: one color for the background and another for the print. Twelfth-century writings mention the earliest calico prints which also feature a lotus design.

As calico has many uses ranging from home décor to clothing, it has many more textures than other fabrics. The fabric may range from sheer and fine to coarse and strong. Calico is similar to denim and canvas but much lighter weight. It is also fairly cheap in its natural state.

Although calico was once a favourite for ladies of fashion, its use in the modern clothing world has fallen out of favour. Now it is most commonly used for things that require a sturdy fabric such as samples for clothing as well as aprons, bags and other similar accessories. The plentiful aspect of calico prints makes it a popular choice for crafting projects.

In the past, enthusiasts in England used printed calico for hangings and bed-covers, as well as for dresses, while in India it was made into saris.

Depending on the calico, people can use it for dresses, blouses, skirts, purses, bed-sheets as well as craft projects and quilts.

Calico prints are appropriately named, although they may not be printed on calico, but on another type of fabric. The dye process used to make calico and calico prints frequently runs when washed so it is recommended to wash the fabric first before use. To do this, run cold water over the calico until it stops bleeding. In hotter water, calico may run or fade and dye other clothes. It can be ironed as well.