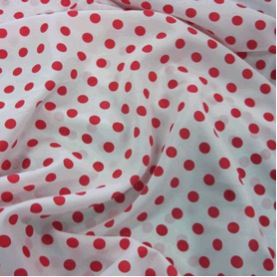 The love affair with polka dot began in 1926, when Miss America was photographed in a polka dot swimsuit. In 1928, Disney introduced the cartoon Minnie Mouse wearing that red polka dot and matching bow dress.

Only in 1930, polka dot dresses were available in stores. In 1940, Frank Sinatra was singing “Polka Dots and Moonbeams”, while the Los Angeles Times assures its readers that “You can sign your fashion life away on the polka-dotted line, and you’ll never regret it.”

The Polka dot got a highbrow style currency when Christian Dior released the collection “New Look”, with many styles bedecked with dots. Dior said to Vogue that his collection, coming after a war that shifted gender roles, is making women “eyelash-battingly female” again.  And it worked, because Hollywood followed the fashion and the print became really popular with actresses:

During the 1920s and 1930s, examples of polka dot clothing are featured in women’s magazines of the day. In may 1929 issue of Pictorial Review called “Novel Ways to Chic for Summer Days” spread the fashion.

Elizabeth Taylor was photographed in a lovely pose in a blouse with a polka dot yoke in 1944, the same year when she appeared in the award-winning movie National Velvet.

Monroe was photographed wearing a polka dot bikini in 1951. The song “Itsy Bitsy Teenie Weenie Yellow Polka Dot Bikini” was the hit that brought polka dots back into vogue, suggesting a carefree attitude and playfulness.

Polka dots are associated with the past, the 50’s and 60’s, but nowadays, with the rise of vintage fashion, they have revived. There is a statement about femininity, back to the era of JFK and stay-at-home wives. There is no point in avoiding polka dots because of their associations.

In 1970, London policewomen were photographed wearing their new uniforms with polka dot patterns, which added a beautiful touch to uniforms that otherwise look like real uniforms. Twiggy and Carnaby Street designers like Mary Quant are using them all the time nowadays.

Diana, Princess of Wales, was wearing a red and white polka dot jacket for a public appearance in 1988. Also known as a style leader, Princess Diana liked polka dot fashion and with red being her favourite colour, she mixed it with white combination.

Knowing that polka dots are so fashionable again, Fabric UK has an offer for photographers who want to use their fabrics by promising 15 m of free material if they like and share our page and mention us in their editorials or blogs.